These Heroes Have Pride! 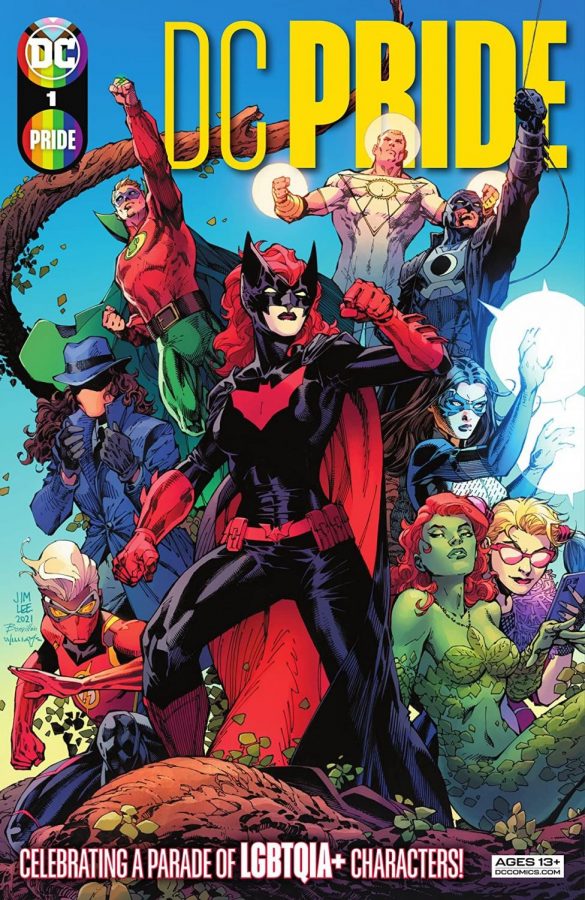 June marks Pride Month, a time where we should highlight inclusivity toward the LGBTQIA+ community. To celebrate, we are going to be looking at what books contain queer characters as well as who these characters are. So, without further ado, let us get into it.

Batman #109: This issue of Batman features a character named Ghost-Maker, a vigilante who travels throughout the world to rid it of crime while having to to work with his rival, Batman. One day, he awakens in a bed featuring both a man and a woman, suggesting he took interest in both sexes. The creator of the character, James Tynion IV (an openly bisexual man), confirmed this was the case; Ghost-Maker was indeed bisexual.

Marauders #21: Iceman, the founding member of X-Men, can manipulate temperature – by shooting and creating thick layers of ice. Through his decades of constant flirting and breaking female hearts, the 2015’s All New X-Men series revealed that the mutant had been in the closet all this time, confirming that he was a gay man. Since then, he has been written as freer and more comfortable with himself, encouraging other young people to face their fears and embrace who they are.

The Swamp Thing #4: Poison Ivy originated in The Green (the realm of all plant life on Earth) who can control all plant life while being an eco-terrorist and villain for Batman to fight. It is no understatement that she prefers plants to people with the exception of Harley Quinn, her longtime best friend. Throughout the years, subtext suggests the relationship was more than platonic, which has been embraced and confirmed by Amanda Conner and Jimmy Palmiotti. Since then, Ivy has been less of a villain, showcasing the positive affect Harley has on her.

Black Cat #7: Felicia Hardy (AKA Black Cat) burgles and manipulates her luck to ensure her heists are pulled off. Stealing things for the thrill of it, she has been a love-interest in Spider-Man, who always searches for the good in her. There have been hints towards her sexuality in the past but in this issue the subtext disappears, featuring her sharing a kiss with Odessa Drake, the leader of the Thieves’ Guild. This brings her bisexuality to the frontlines, bringing this issue as a variant cover to celebrate Pride Month.

Crush & Lobo #1: Crush is the daughter of the intergalactic bounty hunter, Lobo. She crash landed on Earth as a baby and was found by a couple of junkies (later murdered) who raised her as their own daughter. She joins the teen titans using her super strength and sentient chain (Obelus) to fight crime. She identifies as a lesbian and finds herself in a love triangle with fellow titans Robin and Djinn. In Crush & Lobo #1, she teams up with her dad to go on adventures in space full of teenage angst, courtesy of writer Mariko Tamaki.

X-Men #21: Most X-Men fans know Mystique, the blue-skinned ally of Magneto with the ability to transform into anyone. However, what many don’t know is that due to her shapeshifting nature, she identifies as gender fluid and has relationships with both genders. She even married fellow X-Men villain Irene Adler (AKA Destiny). In current comics, all mutants – good and evil – have gained the power to resurrect dead mutants; with this, Mystique has been passionately lobbying for the mutant government to resurrect her wife, though repeatedly denied.

Excalibur #21: Another X-title brings with it another queer character. Rictor is a mutant gifted with seismic manipulation and ability to create devastating earthquakes. Having been a part of several mutant teams (X-Factor and X-Force) in 2005, Rictor made history by sharing the first same-sex kiss in a mainstream comic book, with the warrior from another dimension, Shatterstar. He went on to be an openly gay superhero, dating Shatterstar until their eventual breakup.

Wonder Woman #773: In this issue, Wonder Woman finds herself in the Norse afterlife of Valhalla, attempting to solve the mystery of the missing Valkyries. Created by William Moulton Marston, Wonder Woman has always been a champion of equity and women’s rights. After all, Marston was a passionate feminist, who believed the world would be better off if it were run by women. Due to her origin from the island of Themyscira, a land with no men, many have speculated Diana to be queer. Still, her frequent relationships with men including Steve Trevor in the DC Comics Extended Universe bring skeptiks. However, iconic Wonder Woman writer Greg Rucka confirmed in an interview that Diana was indeed queer and has had romantic interest in women and as well as men though her sexual orientation should not define her.

DC Pride #1: To celebrate Pride Month, DC Comics is releasing an anthology featuring LGBTQIA+ characters. Some of the creators include James Tynion IV, Steve Orlando, Mariko Tamaki, Vita Ayala, and more. To name a few characters, Jackson Hyde (Aqualad – Aquaman’s protege) identifies as gay. Another is the character of Jess Chambers, who identifies as non-binary and is their universe’s Flash dating Andy Curry, the daughter of Aquaman. Lastly, the comic features the book debut of Dreamer, a transgender superheroine first appearing in the television show, Supergirl who will be written by the transgender actress, Nicole Maines.

New Mutants #19: The New Mutants book has many characters in a leading role, with many of them having ambiguous sexual orientations; particularly, Karma. Xi’an Coy Manh, Karma’s real name, was born in Vietnam and fled with her parents in youth. This led to her first sexual encounter being heterosexual and not consensual. She has the power to psionically influence people and is an open lesbian who, in this issue, she is attending the Hellfire Gala after recently being killed and resurrected.

Star Wars #14: In the summer of 2021, the comic franchise Star Wars is having a crossover event entitled Star Wars: War of the Bounty Hunters. In this issue, the famed smuggler Lando Calrissian (former Baron Administrator of Cloud City and friend to Han Solo) is featured. The writer of the movie had said that Lando was pansexual, which could be seen with his attraction to the droid, L3. This is being reiterated by artist Stephane Byrne illustrating a variant cover to celebrate Pride Month with Lando on it.

Catwoman #32: Selina Kyle (Catwoman) is the second feline-inspired cat-burglar to feature on this list, identifying as bisexual like Black Cat. She came out in 2015’s Catwoman #39, after kissing another woman though still having romantic feelings for Batman, confirming that she swings both ways. She has also spent time trying to rescue her friend, Poison Ivy.

The Mighty Valkyries #3: This book features not one, but two LGBTQIA+ characters. First, it stars a new Valkyrie, who is based off Tessa Thompson’s character in Thor Ragnarok and is confirmed as being queer. The book also features Odin’s son. Similar to Norse mythology, he has taken both male and female forms. This has led to him being confirmed as genderfluid, as further confirmed by Disney+ with his rap sheet lists his sex as “fluid.”

Truth & Justice #5: DC’s digital-first title, Truth & Justice, is an anthology series that brings in a new lead character and creative team each month. To celebrate Pride Month, this month’s issue focuses on Batwoman. Kate Kane was always an army brat growing up and enrolled at West Point Academy as a cadet. She entered a homosexual relationship with her roommate, and was discharged after confessing to be a lesbian. In addition to this story, Kate also appears in DC’s Pride anthology, as aforementioned.

Action Comics #1032: While Superman himself is not gay, Midnighter, who stars in Action Comics’ series of back-up stories is. Midnighter has a computer in his brain and possesses enhanced strength, speed, and a healing factor. He got his own solo title during DCYou in 2015, written by the openly bisexual writer, Steve Orlando. Throughout his history, he has dated, broken up with, and even married fellow Stormwatch teammate Apollo, who is currently living with Midnighter.

Wolverine #13: Everyone’s favorite merc with a mouth shows up in this month’s issue of Wolverine, where he is attempting to crash the X-Men’s Hellfire Gala. Deadpool who later shows up was confirmed as pansexual in 2013 by then writer of his series, Gerry Duggan, on twitter. This would make sense, given his wide range of romantic interests, including everyone from the incarnation of death herself and possibly even Spider-Man.

Guardians of the Galaxy #15: This comic has several LGBTQIA+ characters. First, Peter Quill, Star-Lord who was confirmed to be bisexual in 2020, after he entered into a polygamous relationship with both a man and a woman at the same time for one hundred years (he was in a realm where time passes differently). Next we have Hercules. After the Greek Gods attempted to conquer the galaxy, Herc joined the Guardians of the Galaxy to help stop them. He is currently in a relationship with former Young Avenger, Marvel Boy, who is of alien race and has abilities such as energetic weapons and psychedelic saliva.

Gamma Flight #1: Spinning out of the pages of Immortal Hulk, his allies in Gamma Flight are on the run from the government. This book features Dr. Charlene McGowan, a transgender woman and brilliant scientist. Dr. McGowan has been an invaluable ally to Hulk, saving his life and that of his friends, like Rick Jones. She also appears in Marvel’s Voices: Pride #1.

Marvel’s Voices: Pride #1: Like DC’s anthology, this issue also holds a multitude of stories with different LGBTQIA+ characters and creators such as Northstar and Daken. Other characters in this anthology include Thor’s sister from Heaven, Angela, Pixie from the X-Men, Speed, and a new character, Somnus (who will be created by Steve Orlando).

X-Factor #10: Like all the other X-Men related books, the cast of X-Factor are going to the Hellfire Gala in exquisite outfits. This book contains three LGBTQIA+ characters, with the first one being Prodigy. He is a mutant with the ability to rapidly absorb the knowledge of those around him. Secondly, there is Daken, the son of Wolverine. Due to his father thinking him dead for most of his life, Daken became resentful toward him though later rekindling the relationship. He identifies as bisexual and has powers similar to his father: a healing factor and retractable claws. Lastly, Northstar, a French-Canadian mutant superhero. His creator, John Byrne, stated that he always intended for Northstar to be gay but he was limited due to Marvel’s editor-in-chief and Comics Code Authority having a ban on homosexual characters requiring his coming out to wait until 1992, uttering the simple words, “I’m gay”. In Astonishing X- Men #51, he married his boyfriend Kyle and the two remain together through this very issue.

The United States of Captain America #1: 2021 marks Captain America’s 80th anniversary, and in celebration is launching a five-part limited series consisting of the four main Captain Americas (Steve Rodgers, Sam Wilson, Bucky Barns, John Walker) travel across the country to reclaim the iconic stolen shield. Along the way, the group encounters a number of people inspired by the hero and fight for mankind; the first being Aaron Fischer, an openly gay man.

While not every LGBTQIA+ comic book character was named in this list, these characters are many of the most iconic. Over the years, more and more characters have been revealed and created to be a member of the LGBTQIA+ community, adding to greater representation bit by bit. While there is still a long way to go in terms of greater representation of queer people in print media, comic books have certainly improved in its process.